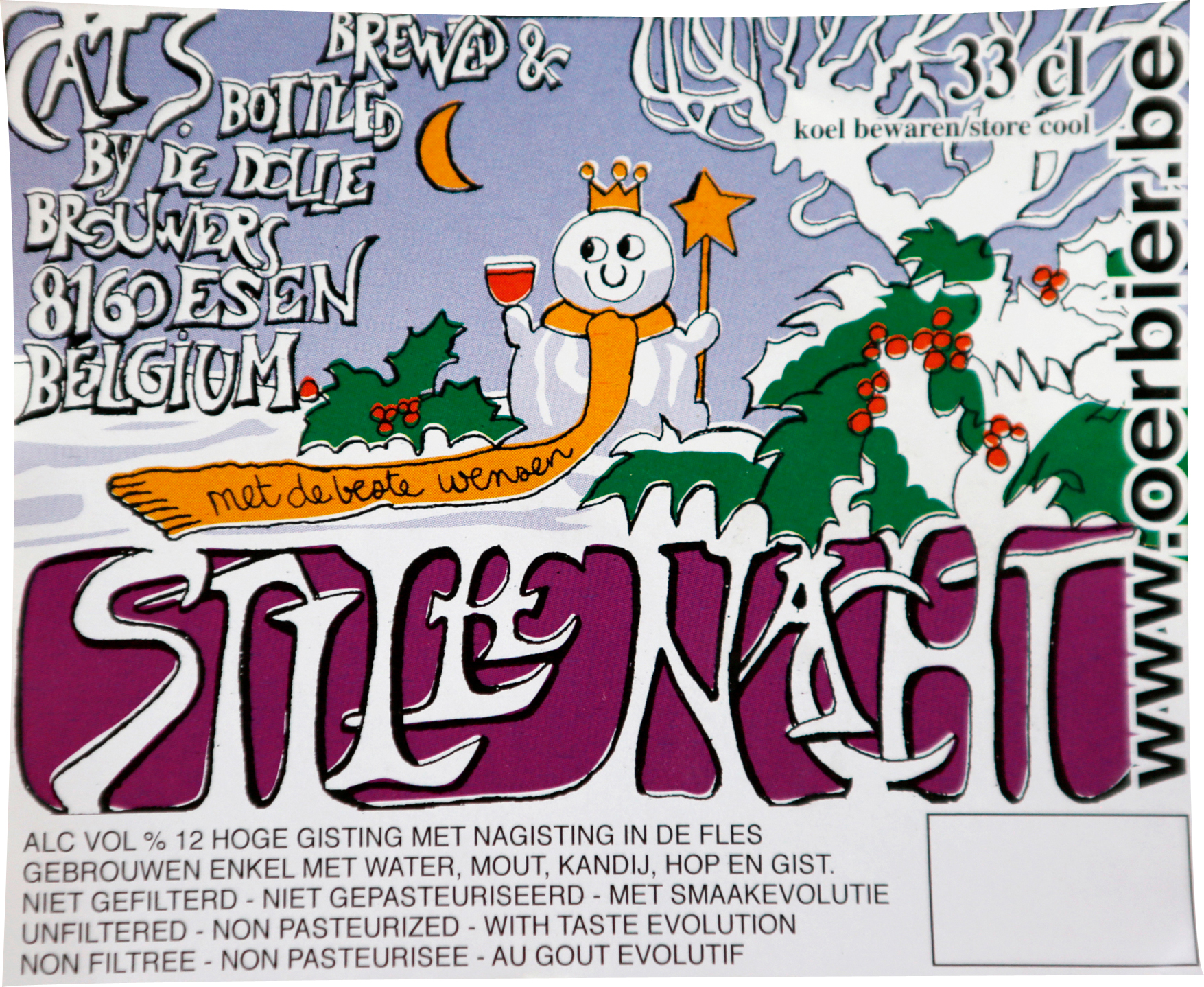 Stille Nacht (Silent Night) is a prestige beer from De Dolle Brouwers, brewed for Christmas. It has a very potent beer (12% alc/vol). It has been boiling for many hours, brewed with pale malt with white candy sugar in the kettle. The Nugget hops gives an extra bitterness to balance the extreme sweetness due to the density. The taste triangle is completed with some acidity of the fermentation. It is a very interesting beer to age. We have samples of every bottling we have done so far and aging hasn't decreased the quality of this beer. Keep some samples at 10°C and mark the year on the cap with an alcohol marker. Cheers!!

The intention was to know how the relation was between the brews, how the different brews were aging,how old was the optimal time to store the beers etc etc etc.

There were 20 tasters invited,14 showed up and there were three tables:one table with regulars of the brewery,one table with friends of de Kulminator in Antwerp, recognised worldwide as the place to be for vintage beers,and one table of tasters of OBER, the organisers of the famous Christmas beers in Essen,Antwerp.The beers were tasted from recent to older,in a Charente glass which was poured by the 'master',one of each table.The tasting chart was prefilled with the measured alcohol% in the DDB-lab,the Ph, the original density of the presented beer ,and the carbonation.The evaluation was global on 20 points, the detail points on 10 Detail points were on visual,odour, taste, aftertaste.There was room to write comments and the final goal was to estimate that one beer was better than the other and how much.We start with the first beer, STILLE NACHT 2013** which means the second bottling of that year.We give it 15/20, it is like that,for every taster.If the second beer is estimated better, the taster gives more, for example 16 or 17 or more.

If the taster finds there may be differences but the quality is the same, the taster gives 15 as well, if the taster prefers the first beer to the second, the score of the second will be less...

If the taste was not so extensive,we would have had a test beer, the same as one of the beers previously tasted, and retasted it just to control if the points were the same.WITH 28 SAMPLES TO GO WE HAVE NOT DONE THAT.

The tasting started at 2PM and ended at 6PM, with a break after 14 samples.The taster has to fill in the chart, and can change his/her points afterwards.There is room for that on the chart, example: after 5 samples the taster is considering that the last 17/20 was too high and should be 16, there is room for the change on the chart.Half points are authorised as well,this shows the alertness of the taster.The tasting was with pieces of brown bread and flat water.

During the break, one of the tasters, Donald, a friend of Dirk Van Dijck of de Kulminator, who has a beer and wine restaurant in Antwerp, had the excellent idea of bringing some food with: MARINATED PIG CHEECKS IN OERBIER AND MACHED PATATOES IN DULLE TEVE :a revelation! and a need for the tasters to go on for the next 14 samples.The name of the restaurant, located near Berchem Station is DE NOTENKRAKER tel: 032360780 and is closed on Tuesday and Wednesday, lucky us.

The final work was to count everything and to make a graphic evaluation of all the quotations, which is shown below.Note that the year 2001 is missing, there were problems with an exploded tank, due to too much pressure with Dry Hopping blocking the tank.There was another batch missing:SN2004***, but Dirk Van Dijck & Leen brought 3 bottles of that batch,so we were about complete. On the graph,we have indicated for our American customers which bottling was exported to the States.

NOT FOR THE MOMENT

What do you want to do ?

If you refuse cookies, your information will not be tracked when you visit this site. Only one cookie will be used in your browser to remember your preference not to be tracked.